Today I am bringing you a review of The Incredible Hulk Coaster at Universal’s Islands of Adventure, a Bolliger and Mabillard Launched Sitdown coaster.  This coaster has a total of one launch, seven inversions, a drop of 115 feet, and a track length of 3,800 feet.  The ride first opened in 1999, but the track and supports was entirely rebuilt in 2016. 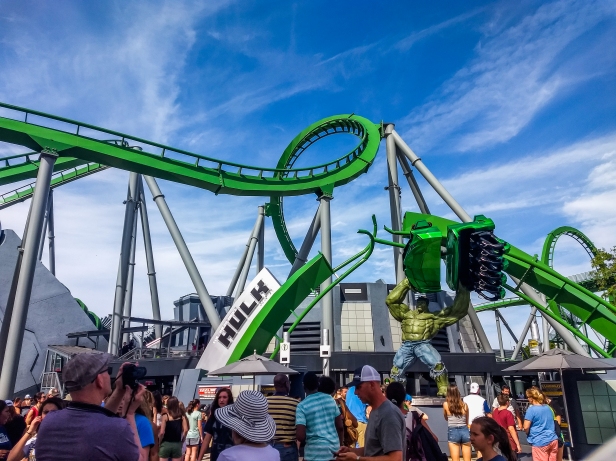 You’ll notice for this review that there are no pictures from the queue of the Incredible Hulk Coaster, and that is because the park enforces a strict no loose articles policy.  Personally, I like that Universal Orlando is taking steps to ensure safety after what happened on the now closed Dragon Challenge with loose objects.  But do not worry about having to pay to put your loose articles away, Universal offers free lockers just outside the attraction.

However, one would expect Universal to heavily theme the queue to compensate for guests not being able to go on their phones.  This, sadly, is not exactly the case.  Universal did theme the queue, but it is with a lot of high-bass noises in a crowded room with televisions simply showing a screen about gamma experiments.  This led me to a lot of discomfort when the ride went down for about 20 minutes, as the bass persisted and my ears started feeling horrible. 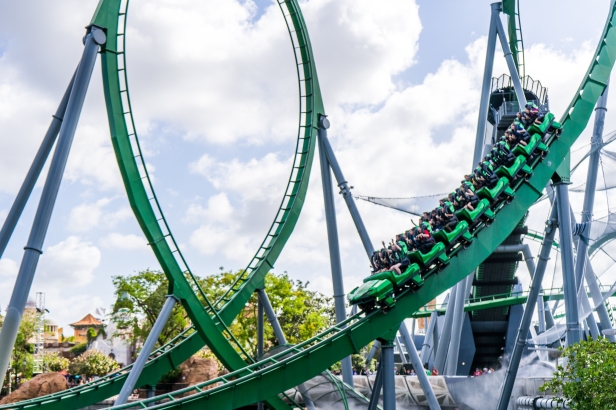 Even with the queue being as loud as it was, I thoroughly enjoyed the ride experience on the Hulk.  The ride starts with a fast launch uphill, which is nicely themed in the “scream-tube”.  This launch is pretty forceful, and leads into a nice roll that leads into the 115 foot first drop. 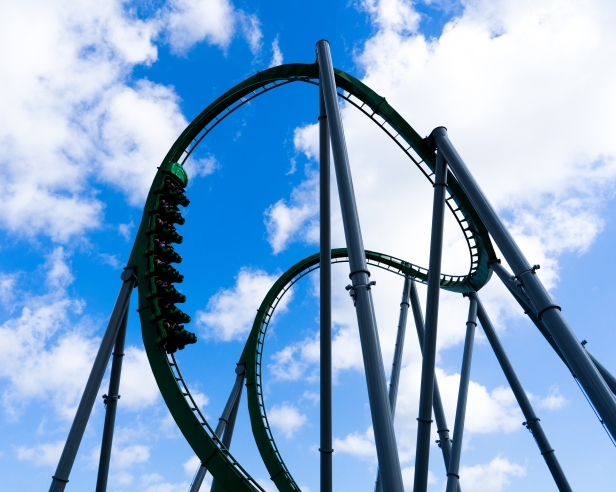 The drop leads into the second and third inversion of the ride, a cobra roll.  Normally, I am not much of a fan of cobra rolls, but I found the Hulk’s cobra roll to be very smooth and intense.  After the cobra roll comes the first vertical loop, which is alright.  It’s a perfectly good vertical loop, but doesn’t stand out much to me on this ride with the incredible elements it has to offer.

The loop is followed up by a quick turnaround, and then the ride’s first corkscrew which leads straight into a drop right into the second vertical loop.  Now this vertical loop, because of its smaller stature, is one of my favorite elements on The Hulk.  Instead of feeling drawn out, this loop is really small, leading to very intense g-forces.

After this fantastic element comes a turnaround and a mid-course brake run.  The brake run is fairly small, which leads to a feeling of being thrown into the front of the restraint as it hits the block brake.  After being thrown into the restraint, the Hulk leads into a final corkscrew, one last set of turns, and the final brake run.  The corkscrew after the brakes is fairly good, and the turns after it provide a nice ending to the ride. 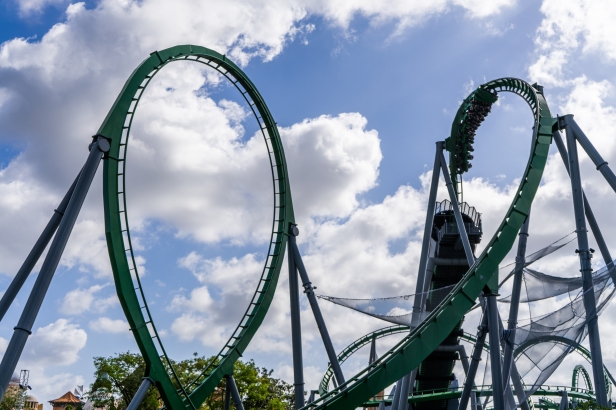 Now, for my ranking of the coaster.  Hulk really surprised me in how intense it is, and made a really good impression on me.  Consequently, for me, Hulk is a top five coaster, sitting just behind rides like X2 at Six Flags Magic Mountain and Gold Striker at California’s Great America.

Thank you for checking out this review!  Make sure to check out my trip report from Universal’s Islands of Adventure to see what I thought of the other rides there.